Sometimes we all need that little bit of extra motivation to drag ourselves to the gym – and a CrossFit box in China seems to have found the purr-fect inspiration.

The CrossFit Pepper gym has a friendly in-house feline that likes to deal out high fives to gym goers during their workouts.

CrossFit’s social media channels shared a video of the cat sticking his paw out to give everyone a reassuring confidence boost as they jogged past. 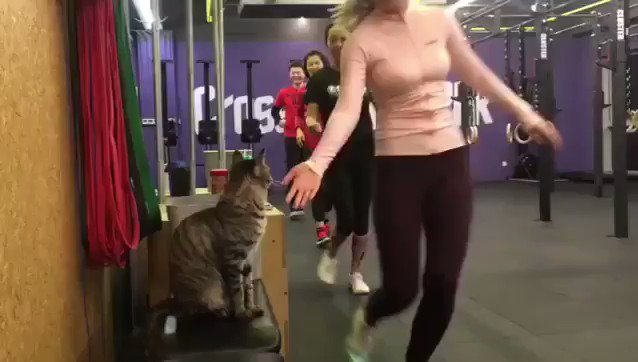 Perhaps the cat has been listening to CrossFit founder and CEO Greg Glassman, who travelled to Hangzhou last month for a gathering of CrossFit China affiliate gyms.

Who knows if the tabby was in the audience, but Glassman’s words were clearly inspiring.

“CrossFit isn’t for everyone, but it’s for anyone,” he said.

“What’s so important about CrossFit is its distillation of all we have in common, and I see that here as clearly as anywhere I’ve been.”

China will host its first sanctioned event, the Asia CrossFit Championship, in April as a qualifier for the 2019 CrossFit Games.

The Pandaland CrossFit Challenge in Sichuan Province, to be held in December 2019, will act as a qualifier for the 2020 Games.

This site uses Akismet to reduce spam. Learn how your comment data is processed.